“Building smart cities is based on technological iteration and innovation, as well as transforming and upgrading urban intelligentization through New Energy+ Big Data&AI,” said Zhao Baige, vice chair of the 12th NPC Foreign Affairs Committee, chair of the Advisory Committee of BRI International Think Tank at the Chinese Academy of Social Sciences, chair of Advisory Committee of Research and Development International (RDI) at the 2019 Euro-China Green and Smart City Summit held on September 26. 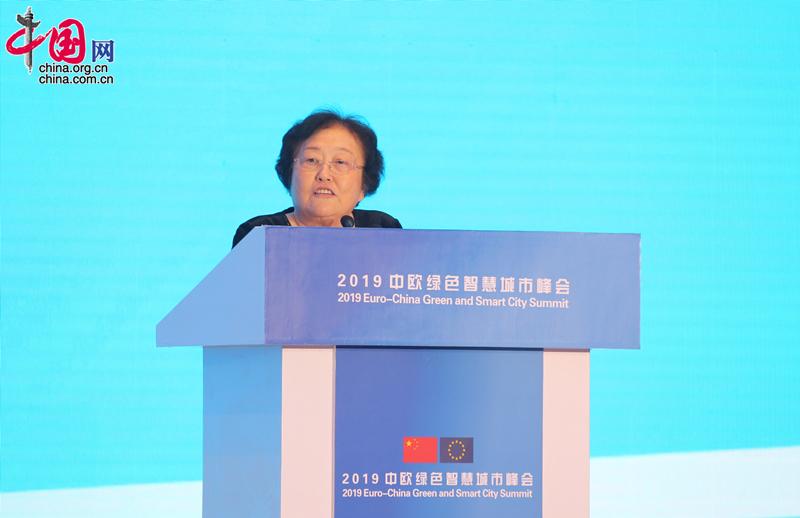 The forum themed on “The Future is coming” and “Smart Technology for People's Lives,” advocated by Zhao. She analyzed the impacts that the 4th Industrial Revolution has brought to people, including the prospects of green city development in the future, the construction and operation of smart city, high-quality smart city development promoted by the National Quality Infrastructure (NQI), and measures benefiting people's lives and their effectiveness.

“Human civilization started, iterated and gradually ushered in the dawn of the 4th Industrial Revolution. With the profound overall thinking brought about by the revolution, and the collision of ideas, green development has increasingly become the consensus of all parties. Elaborating the global consensus on high-quality development, RDI holds that the important supporting innovative technology of the 4th Industrial Revolution is the multi-scenario overlapping application of New Energy + Big Data & AI. The integration and ubiquity of these two technologies will bring in-depth city integration and revolutionary business models for green development," said Zhao.

Zhao believes that the smart city is the regional aggregate which can play comprehensive urban function, and smart integration stems from technological iteration and innovation, as well as the transformation and upgrading of urban intelligence by New Energy + Big Data & AI. Its essence is to return to the full use of renewable energy, and to rationally and scientifically reduce the direct use of fossil energy, and to integrate into Big Data & AI ubiquitous technology (information security is the basis) to maximize the perception of urban Internet of Things. At the same time, while following urban development concepts like the “people-oriented” and “green harmony”, cities are empowered by “green development” and “smart technology.”

Zhao discussed the promotion of high quality development of green and smart city by NQI. She believes that the NQI concept proposed by the United Nations Industrial Development Organization and the International Organization for Standardization integrates the internationally recognized quality compliance element, including measurement, standards, accreditation and inspection testing (conformity assessment) into the industrialization of innovative science and technology of the 4th Industrial Revolution, which is an important basis for ensuring high-quality development of all relevant fields.

Several enterprise representatives of RDI who made keynote speeches in this Forum encouraged the integration of their innovative science and technology with NQI, enabling the cross-border integration of industrial chains, and effective combination of quality compliance, which comprehensively and stably safeguard and support high quality development of green and smart city.

Finally, Zhao summarized the measures benefiting people's lives and their effectiveness. She said that the attendees shared the same idea -- to involve smart technologies into people’s lives and benefit them. Innovative technologies used and shown at this summit, including smart city, smart transportation, smart medical care, and smart education have been applied in people’s life and initial results have been achieved. They are remarkably improving the overall effect of cities’ “green development” and “smart integration” and people’s lives. If the "Euro-China Green and Smart City Nanning Consensus" reached at the Summit and successful experience can be promoted in the participating countries and regions along the Belt and Road and even the globe, more people will be benefitted, and this will help the whole world deal with the environmental and climate problems.

This Forum was jointly organized by China Urban and Small Town Reform and Development Center under the National Development and Reform Commission, the French Prospective and Innovation Foundation, the People's Government of Guangxi Zhuang Autonomous Region and Belt and Road International Think Tank of the Chinese Academy of Social Sciences, co-organized by the Nanning Municipal Government and the Qinzhou Municipal Government and undertaken by RDI.