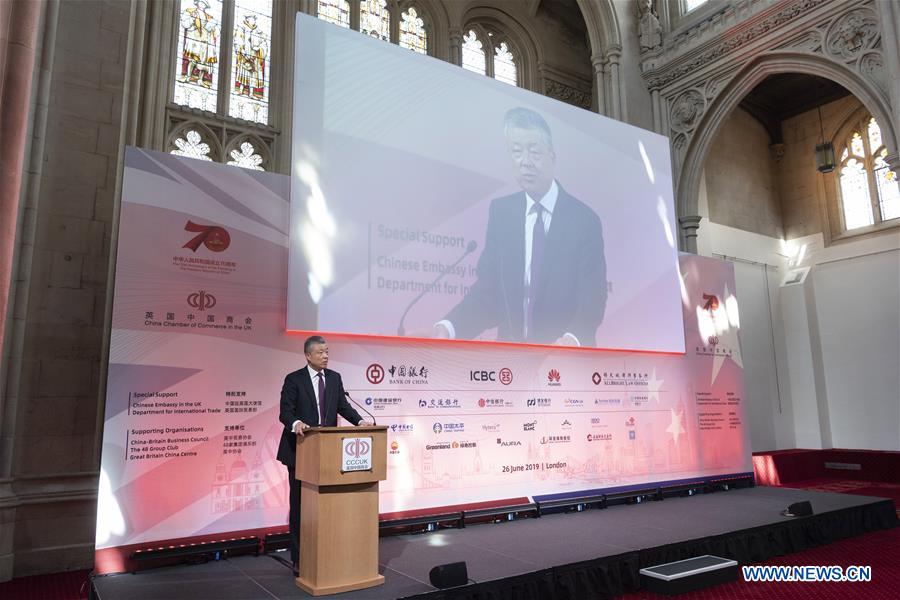 The China-Britain business cooperation faces promising prospects and three major opportunities including the fourth industrial revolution, China's new round of opening-up and the Belt and Road Initiative, said Chinese Ambassador to Britain Liu Xiaoming on Wednesday.

In his keynote speech at the 2nd China-UK Economic and Trade Forum, Liu said, "This forum has always been an important platform for business leaders from both countries to exchange ideas, assess needs, and discuss cooperation and development."

"I hope the business leaders from both our two countries will always take a strategic approach and long-term perspective in promoting China-UK business cooperation. I hope you will seize the opportunities and work hand in hand for win-win results," Liu said.

"UK economy remains robust ... As we look to the future we seek to build on this with an ambitious future trade and investment relationship with China," said Graham Stuart, British minister for investment.

Referring to a Memorandum of Understanding (MoU) on third-party market cooperation signed by the two countries on June 17, Stuart noted that "we are keen not just for a win-win, but in that place a win-win-win."

"Despite the great changes in the international situation, the golden era of China-Britain relationship continues to move forward steadily," said Gao Yan, chairperson of the China Council for Promotion of International Trade.

"At a new historic starting point, China-Britain economic and trade cooperation has become more important and more valuable, and trade and investment contacts between the two countries have entered a fast track," she added.

Stephen Perry, chairman of the 48 Group Club, noted in his remarks that the different systems can work alongside and cooperate with each other, adding that "we are going to be able to work with China in a world which is going to become more similar rather than more different."

The 2nd China-UK Economic and Trade Forum represents the great effort "to reach the full benefits of the success of the 10th China-UK Economic and Financial Dialogue" and "to strengthen financial and commercial links," said Fang Wenjian, chairman of the China Chamber of Commerce in the UK (CCCUK) and general manager of Bank of China Limited London Branch, in his welcome address.

"It also helps to inject confidence and dynamism into the golden era of China-UK relations," Fang added.

With around 250 attendees from both countries, the forum focused on two topics, which are "the development of China-UK economic and trade relations, and new cooperation opportunities" and "the new measures of China's opening up and China-UK cooperation on the Belt and Road Initiative."